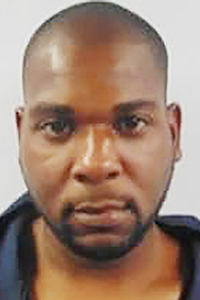 Franklinton Police Department officers recently responded to a call of shots being fired in the 2100 block of Williams Street, according to FPD officials.

Upon arrival, Delarius Jenkins, a.k.a. “Hamburger,” was found in the driver’s seat of his vehicle, slumped over the steering wheel, officials said.

Empty shotgun shell cartridges were reportedly located outside the vehicle. In the passenger’s seat, officers located a 12-gauge shotgun.

Officials said that Jenkins is currently on parole for armed robbery, due to his involvement where a man was robbed and subsequently murdered in Franklinton.

Jenkins was taken into custody and charged with being a convicted felon in possession of a firearm.

“This is the unfortunate reality of what our communities face today,” Franklinton police chief Justin Brown said. “One violent crime which resulted in a senseless murder, and the co-conspirator is given a second chance at life.

“He has chosen that chance not to be worth it, thus resulting in yet another encounter with the judicial system. We vow to keep our town safe and, as unpleasant as that may be at times, repeat offenders like Mr. Jenkins must be held accountable for their actions.”