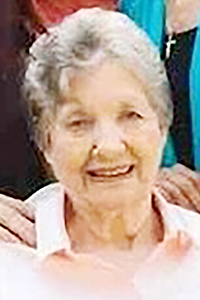 “Bea” Eva Beatrice Rayburn Shaw, a former resident of Bush, passed away on June 5, 2020, in Enon.

A graveside service was held at Grantham Cemetery on Tuesday, June 9, at 11 a.m.

Visit www.pooleritchiefuneralhome.com to view and sign the guest book.

Essie Pearl Newkirk was called home on June 8, 2020. She leaves to carry on her legacy and treasure her... read more