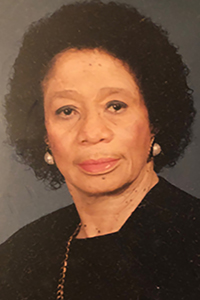 Just 89 years ago, the lives of Ruby and Curry Conley were blessed with a newborn girl on the third day of September, nineteen hundred and thirty. They excitedly spread the news throughout Bogalusa, amongst their family and friends.

The name given their newborn was Doris Faye Conley.

Doris accepted Christ as her Savior early in life at Bethlehem Baptist Church in 1937 under the Rev. O.P. Smith. She was a dedicated worker in the house of the Lord. Among many of the positions that she held, some were: a teacher in the senior mission and vacation bible school, secretary of the church, and a pianist for the choir.

Doris grew up in Bogalusa and attended the schools there. She was a graduate of Central Memorial High School. Doris advanced into collegiate studies and earned a Bachelor of Arts Degree in Elementary Education from Southern University A&M College. Doris continued her education and received her +30 from Southeastern University.

On the fourth of May in nineteen hundred and fifty-eight, she united in holy matrimony to the love of her life, Oscar C. Perry. The union was blessed with two loving and devoted children, Tresa and Allison Perry.

Doris was a dedicated school teacher who devoted her love and energy to helping students to realize their greatest potential. She taught one year in Slidell, from 1952-1953. Then she dedicated the next 34 years to the children of Bogalusa City School System. She retired in 1987, leaving behind a legacy to be admired.

Doris kept busy after retirement. She volunteered for many years with the Bogalusa Community Medical Center Auxiliary, affectionately called “The Pink Ladies.” She also was a member of the Golden Floral Club, where they worked year-round to serve our community in a variety of ways. One of her favorite roles was being on the committee for the Central Memorial Class Reunion. Doris’ other involvements were: Kappa Delta Pi Honor Society, Louisiana Teacher’s Association, American Association of Retired Person, the National Association of Retired Teachers, and AARP.

Doris was preceded in death by her parents, Ruby and Curry Conley; her husband, Oscar Perry; her god-brother, Robert Brice Jr. and her grandson, Royric Perry.

Graveside service will be conducted on Saturday, April 18, at 11 a.m. at the Bogalusa Cemetery. The Rev. Christopher Matthews will be officiating.