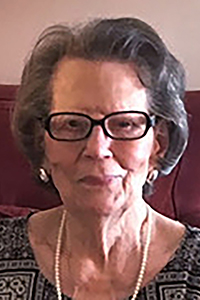 Winona Pollock Mitchell was a 99-year resident of Bogalusa. She was born Nov. 29, 1920 to James B. and Ada Gonzales Pollock, and graduated from Bogalusa High School. She had an amazing memory of current events, her family and the history of Bogalusa and its residents until the time of her death on Jan. 27, 2020, at Lakeview Hospital in Covington.

Mrs. Mitchell drove until she was 96 years old and was able to stay in her home for the last years of her life, thanks to the dedicated care of her daughter.

She was a founding member of the Bogalusa Civic League and served as President. As a member of ESM United Methodist Church, she served as a Circle Leader. Her talents for decorating and flowers were used for many civic gatherings including activities at the YWCA. She worked in the family business for 25 years and later sold insurance. She was the state coordinator for the Blepharospasm Foundation many years.

She is preceded in death by her husband, Corbett Louis Mitchell; her parents; a brother, James Pollock; two sisters, Violet Brown and Theo Rickards; and two great-grandchildren.

Poole-Ritchie Funeral Home is in charge of arrangements. A graveside service is scheduled at Ponemah Cemetery at 10 a.m. Saturday, Feb. 1, to be conducted by the Rev. Tim Lawson.