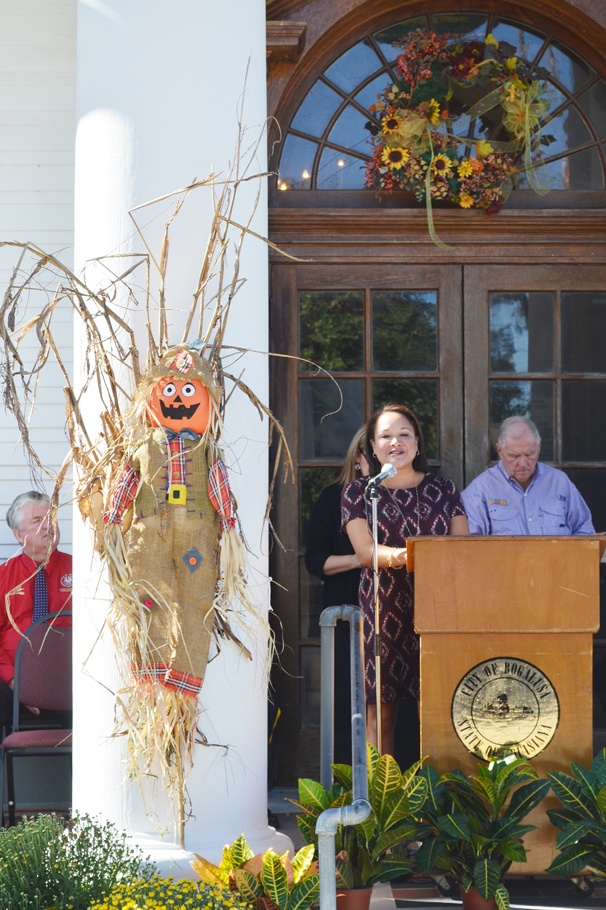 On Friday, residents from around the parish gathered at the steps of the Bogalusa City Council to watch the Bogalusa High School Army JROTC raise the official flag of the Washington Parish Free Fair and kick off fair season.

The flag ceremony was an hour-long affair of marching band music, dance routines, a choir performance and speeches under clear blue skies and crisp autumn temperatures.

Bogalusa Mayor Wendy Perrette thanked all the volunteers who put the fair together, and she said she’s looking forward to the fair, which begins Oct. 19. This will be the fair’s 105th year and Perrette said the fair only gets better each year.

“We’re anticipating another great year at the fair and I look forward to seeing you there,” she said.

Fair membership chairman Mike Breland also thanked all the volunteers and he introduced the 2015 Fair Queen Fallon Turner, who read what the colors of the flag represent.

The flag was first introduced 31 years ago, and Turner said the gold represents fall, green symbolizes forestry and agriculture, red stands for the dedication of the volunteers and white represents the wholesome family atmosphere.

During her reign as queen, Turner has crisscrossed the state attending various fairs and festivals, but she said Washington Parish’s fair tops them all.

“I’ve been to a lot of fairs and I can tell you, this one is the best,” she said. “And I’m not just saying that because I’m really biased. I’m really excited to celebrate 105 years with you this year.”