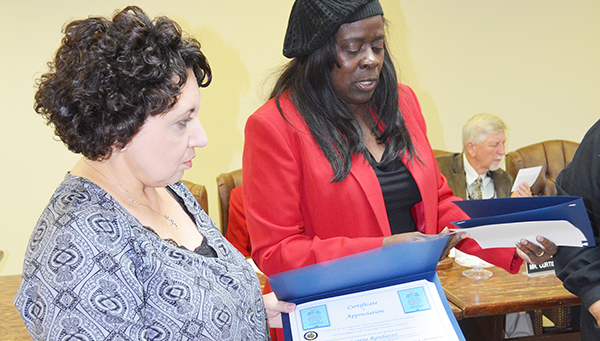 Donna Mingo, Yolanda Ladner and Rosalind Smith all requested an end to harassment of their children by high school staff members.

“If you have a problem, I would like to work with you to work it out,” Breaux said. “I do want to hear from you. If you have an appointment set up, I promise I will meet with you.

“I don’t smear these kids and I treat kids with respect like I want to be treated with respect. I’m never going to disrespect your kid. Let’s make this system what it used to be — one of the best in Louisiana.”

The protocol and procedure by which parents must follow to raise concerns is first to contact one of four disciplinarians at the school. The particular concern then is heard by Principal Lesley McKinley, followed by Child Welfare and Attendance Supervisor Phlesher Mingo.

If a parent still desires to meet with Breaux, an appointment must be made through Breaux’s executive secretary, Robin Day.

Mizell led the four-person field with 14,344 votes, or 43 percent. Murphy, a Democrat from Bogalusa, managed 10,767 votes, or 33 percent. The district encompasses all of Washington Parish and the northern parts of St. Tammany and Tangipahoa parishes.

“My entire life has been about public education, said Murphy, a former drill sergeant and dean of Northshore Technical College-Sullivan Campus.  I’m concerned about where our state is headed. Educators are un-deserving of the treatment they’ve received. I want to change that.”

In business matters, the Board approved:

• Travel of the BHS Jr. ROTC to Brandon, Miss., earlier this month.