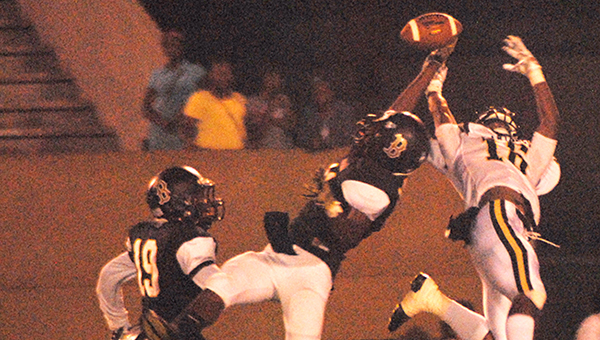 Bogalusa’s Diante Lenoir deflects a pass intended for a Salmen receiver Friday night. The Lumberjacks won 20-10, earning their first win of the 2015 season.

Things looked bleak early on for Bogalusa, but the Lumberjacks rebounded from a 10-0 deficit and defeated Salmen, 20-10, at home Friday night.

“We came out flat,” Bogalusa coach David Roberts said. “It was a big game last week and you know how it is coming off of those big games. We came out flat, but we were able to hang in there and get some scores and then come out in the second half and just finish it off.”

The possession after Salmen went up, 10-0, Bogalusa (1-3) drove 61 yards in three plays to trim the Spartans’ lead to three points.

Charles Dyson opened the series with a 43-yard run. A flag on Salmen moved the ball to the Salmen 9-yard-line. Tymothy Toussaint then ran for 4 yards.

Bogalusa got on the board on the next play when Toussaint — who threw for 148 yards and three touchdowns Friday night — hit Caleb Greely on a slant route from 5 yards out. Sean Forbes was good on the extra point with 5:57 to go in the first half.

The scored remained 10-7 at halftime.

Salmen opened the second half with the ball, but fumbled on its fourth play. Bogalusa recovered and took over at the Spartans’ 29.

On third-and-14 from the Salmen 33, Toussaint completed a long pass to Forbes. Forbes went up and made a leaping catch for the touchdown to make it 13-10 with 7:32 left in the third quarter, after De’shaun Short blocked the extra point. 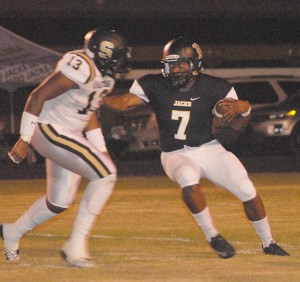 Salmen turned the ball over on downs and then the Lumberjacks drove 73 yards for a touchdown. They capped off the drive when Toussaint connected with Forbes with a short pass along the right sideline.

Forbes cut inside and then toward the outside before taking off up the right sideline and scoring. Forbes also added the extra point, extending the lead to 20-10 with 47 seconds left in the third quarter.

Both teams had scoring opportunities after that, but could not capitalize.

Salmen had a chance to trim it to one possession late in the fourth. The Spartans took over after a turnover on downs at their own 27. L.J. Leonard completed a pass in the middle of the field to Joshua Rodriguez, who turned up field and took it to Bogalusa’s 32.

A flag on Bogalusa later in the drive put the ball at its 17, but Tramarcus Levi intercepted a pass and returned it to the Lumberjacks’ 4 to end the drive.
Salmen took a 3-0 lead on the game’s second possession when Eddie Smith was good on a 37-yard field goal, which finished off a 73-yard drive. On the possession, Bogalusa had 40 yards worth of penalties and Salmen had 10.

Roberts said the flags are something his team and coaches have to clean up.

“We had too many penalties (10 for 90 yards for the game),” Roberts said. “We’ve got to clean that up, but we came out with the win and I’m happy about that.”

Salmen added to its lead on an 8-yard run by Robert Hayes Jr. in the second quarter. Smith’s extra point was good.

Up next for Bogalusa is a home game against Loranger on Friday, Oct. 2. 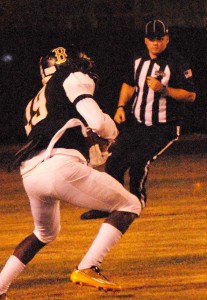 DAILY NEWS PHOTO/Chris Kinkaid
Bogalusa’s Dominique Tillman intercepts a pass and starts to return it against Salmen on Friday night.