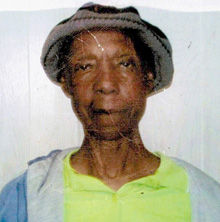 Carrie Abram Thomas was born on Dec. 29, 1937, in Angie to Clarence and Minnie Abram. She was the older of two siblings. On Wednesday, Feb. 25, 2015, she entered into an eternal rest, returning to the “Bosom of her Heavenly Father” from whence she came.

Joining Live Oak United Methodist Church at an early age and accepting Christ as her personal savior was the foundation needed to ensure being a committed member for many years. She served in whatever capacity necessary until her health began to decline. During her younger years, she was employed by The Green Giant Canning Company in Wisconsin. Returning home because of downsizing, she worked for a number of small farms throughout Washington Parish, and as far as Sandy Hook, Miss. Eventually, she returned to being a homemaker.

Carrie was a woman who loved her family with all her being. If she could help you accomplish something, all you had to do was ask, and if it was in the power of her hand to do it, then it was done. It was a lesson that was taught to all of her children. “That we are to love one another and treat people like we want them to treat us.”

Visitation is Friday, March 6, 2015, from 2 until 6 p.m. Family hour is 6-7 p.m. The funeral is Saturday, March 7, 2015, at 11 a.m. at Live Oak Methodist Church in Angie. Pastor August will be officiating. Cook-Richmond Funeral Home is in charge of arrangements.