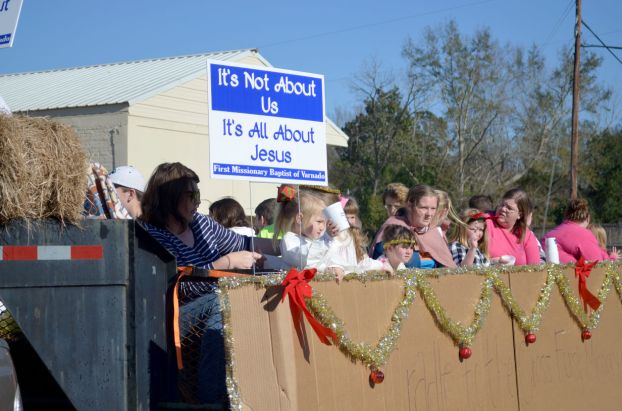 The Village of Varnado was abuzz with excitement on Saturday, Dec. 13, as locals and folks from neighboring communities celebrated the Christmas season with the first annual Varnado Christmas Parade. Children’s high-pitched voices could be heard squealing with delight as they saw the flashing lights in the distance and waited impatiently for the parade to roll.

Warm temperatures and clear skies provided the perfect backdrop for the day’s activities, and the large crowd on the street took advantage of the opportunity to meet and greet friends and neighbors.

Laughter filled the air as anticipation rose to a fevered pitch among the little ones.

Beverly Harry exclaimed, “It’s our first parade, and we are very excited.”

Drakerra Beavers and her fiancée, Kenneth Terrell, enjoyed the parade along with Drakerra’s niece, Trinitee Lee.

Clarice and Doug Fitzgerald didn’t have far to travel since they live on the parade route.

Clarice said, “We are absolutely excited about the parade. This is fun.”

Many local children gathered in the grassy area of the Village Hall to pose for a photo with the huge snowman towering over them. Soon after sirens began to blare, the snowman was abandoned for a coveted place along the parade route.

Decorative floats, dancers and music provided a wonderful beginning to a new Varnado tradition. Many people decorated a personal vehicle or ATV and joined in the fun. The $10 entry fee was in keeping with this season of giving. All money raised will be used to provide food for the needy in their community.

The parade coincided with the 100-year anniversary of incorporation of the village, and many positive comments of pride and satisfaction could be heard along the route. With Santa’s reindeer were resting up for a trip they plan to take on Christmas Eve, the Varnado fire truck replaced St. Nick’s usual mode of transportation.

Much to the delight of the children and parents in the crowd, Santa graciously hung around after the parade to visit and take pictures at the Village Hall.

Outgoing Bogalusa City Council members bid their farewells during their final session before the new City Council is seated next... read more