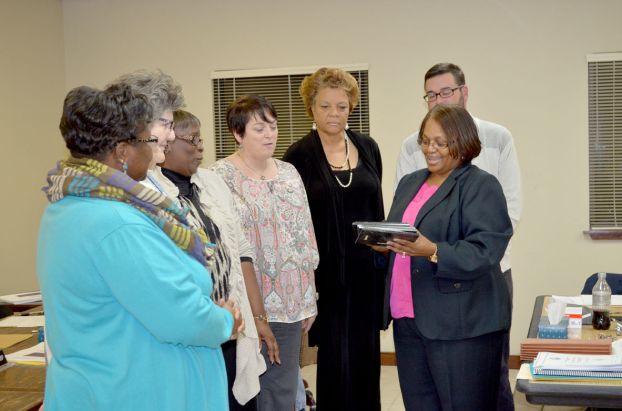 Phillip Rebowe of the audit firm Carr, Riggs and Ingram had mostly good news to share with the Bogalusa City School Board when he delivered the audit report for the fiscal year that ended June 30.

In no area did the firm find any weaknesses, inconsistencies or exceptions, and the opinions came back unmodified, or “clean,” he said.

“That’s the highest level of assurance an audit firm can issue,” said Rebowe.

He added that because of the findings, the school district earned both the Association of School Business Officials and the Government Finance Officers Association certificates of excellence for financial reporting.

“Of all the school boards we do, very few have no exceptions,” said Rebowe. “You’re definitely in elite company in the finance department.”

Because of the accolades, Superintendent Willie E. “Toni” Breaux and the School Board issued awards of recognition to Finance Director Deloris Walker and her staff.

“I’m so appreciative of the business department and Mrs. Walker and all that they do,” said Breaux.

“I couldn’t do this without my team,” Walker noted, adding, “I hope we can continue to bring awards back to the Bogalusa City School Board office.”

The specific findings of the report offered few surprises to School Board members.

Total assets and revenues were down by more than $3.5 million from the previous year, the bulk of which came in the form of decreased MFP funding from the state. Cuts to expenditures, however, made up for the difference as they were down more than $4.5 million.

“You did a good job of decreasing expenditures,” said Rebowe.

Earlier in the meeting, School Board officers for 2015 were elected. Curtis Creel, nominated by Eleanor Duke, will serve as president, while Paul Kates, nominated by Brad Williams, will take over as vice president.

In other business, the School Board approved a half-day for both students and employees on Friday, Dec. 19. Students will be wrapping up exams that morning.