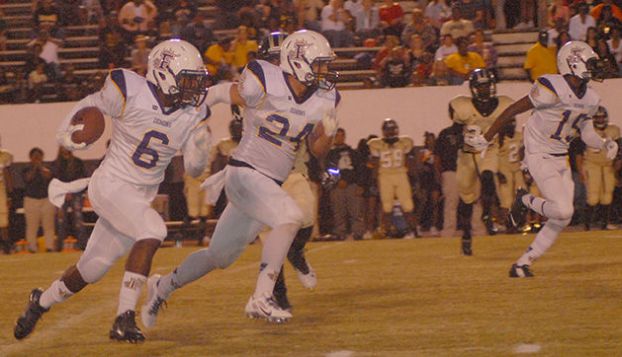 Franklinton’s Demons are back on the road this week, looking to build off of last week’s performance as they head to Amite to face the Warriors.

The Demons enter this week with a 3-1 record and are coming off of a 60-6 victory over Bogalusa.

“Our kids played well on both sides of the ball and did some things better than what we did (the previous) week,” Franklinton coach Shane Smith said. “The communication was better from one week to another. The ironic thing is that we’re just scratching the surface of what we can be. We’ve reeled off three victories, and I think our best football is in front of us, and that’s exciting.”

Franklinton begins tonight ranked seventh in Class 4A by the Louisiana Sports Writers’ Association after being eighth last week. The Demons are third in LHSAA’s Class 4A power rankings.

The Demons’ defense bounced back after a rough game against Brother Martin and forced four turnovers while holding Bogalusa scoreless until the early portion of the fourth quarter.

“They just played great,” Smith said. “We scored two defense touchdowns. We tackled, we covered, and we had tipped passes. They were active.”

The unit scored two touchdowns. Josh Magee returned an interception for a touchdown and Kobe Crain brought a fumble back for a score.

Offensively, Michael Wilson completed eight of his 14 passes for 123 yards with two touchdowns, one each to Chandler Davis and DeAndre Allen.

This season, Wilson is 43-of-80 passing (53.8 completion percentage) for 630 yards, five touchdowns and an interception.

Like Franklinton, Amite comes into tonight with a 3-1 mark and is the 10th-ranked Class 3A team by LSWA. The Warriors were not ranked going into last week. Amite is seventh in the LHSAA power rankings.

Amite blanked Belaire, 41-0, last week. Its only loss this season was to Ponchatoula, 55-6, in the second week.

Amite coach Alden Foster said his club played well against Belaire but said they are hurting themselves with penalties.

“We have our quarterback back from last year in Devarious Henderson,” Foster said. “Defensively, we have a lot of experience back. We’ve played well all year except against Ponchatoula. Last year, they hit some big passes on us, so we’ve got to stop the big play. We’ll have to execute on the offensive side to give our defense some rest, and we have to win the battle up front.”

The running back is Kenner Harrell, who ran for 1,800 yards last season. He’s missed a couple of game because of injury this season. Last week, he ran for 77 yards in the first half.

The line is led by Fred Torrence, who was a second-team all-state player last season.

Foster said sophomore wide receiver Devonta Smith is having a great season. Smith has caught six touchdowns and is averaging 75-80 yards receiving per game. Defensively, he’s a defensive back and made four interceptions.

Foster said Smith, who is 6-feet tall, has deceptive speed and a 41-inch vertical.

Defensively, end Brad Porter has more than 40 tackles to go with seven sacks.

Outside linebacker/strong safety Joshua Perry, an LSU commitment for 2016, was named the Louisiana Football Magazine Class 3A Player of the Week two weeks ago.

In that game, he recorded 12 tackles, three sacks, and a forced fumble, while recovering one, returning an interception 67 yards for a touchdown and adding a 65-yard touchdown reception.

Next week, Franklinton heads to Pearl River to open the District 8-4A season.

LSU’s Terrence Magee put up solid numbers and scored his first touchdown of 2014 in the Tigers’ 63-7 victory over... read more