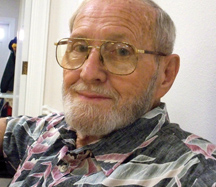 Jack, who was born in New Orleans on Aug. 19, 1927, was a follower of Christ. He was a man of strong faith, love and family. He was married to his beautiful bride, Frances Williams Harry for 65 years. For 42 years he worked at Crown Zellerbach/Gaylord in wood procurement, but his real workmanship was with his hands. He spent many days in his workshop building anything from his infamous birdhouses and various pieces of furniture to the very house he lived in.

Jack loved his family, immensely; his children, grandchildren and great-grandchildren filled his heart with pure joy. He enjoyed camping and traveling across the nation with his family delighting in the beauty of nature and all things provided by our Lord and Savior. Jack served as the chairman of building and grounds for Mile Branch Settlement at the Washington Parish Fairgrounds for many years.

He was preceded in death by his son, Thadius Jonathan Harry III; his parents, Thadius J. Harry Sr. and Lucille Earles Harry; his sister, Helen Harry Schmidt, and her husband, Ray; and his brother-in-law, Elven Mizell Jr.

A celebration of his life was held Thursday, April 10 at Poole-Ritchie Funeral Home from 6-9 p.m.

Visitation will continue on Friday from 9 a.m. until time for funeral services at 11 a.m. The family is privileged to have the services conducted by Ryan Williams, the Rev. Larry Mizell and Dr. Ron Swager. Interment will follow at Hillview Memorial Gardens in Bogalusa.

Donations may be made to Team HOPE Missions, a nonprofit organization, P.O. Box 40193, Baton Rouge, LA 70835, or at the website, www.teamhopemissions.com. The organization is dear to the family and supports those less fortunate, both stateside and abroad.