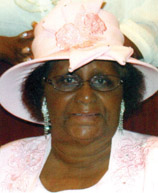 Amie, the youngest of 10 children, was born in Varnado on April 8, 1923, to William Oliver Mondy and Martha Mondy, both of whom preceded her in death.

She attended Jones Creek School System in Varnado, and at an early age she united with Mt. Zion Missionary Baptist Church under the leadership of the Rev. B.B. Moses. She later united with Mt. Bethel Baptist Church and was a faithful, active member of the church mission department until her illness. She married the love of her life, Earnest Lee Jackson Sr. in 1946, and they were blessed with eight children.

Visitation will be held Friday, Jan 24 at Cook-Richmond Funeral Home from 2-6 p.m. The funeral service will take place on Saturday at Mt. Bethel Baptist Church at noon, preceded by a family hour 11 a.m. The Rev. Johnny Johnson will officiate. Interment will follow at Robinson Cemetery.