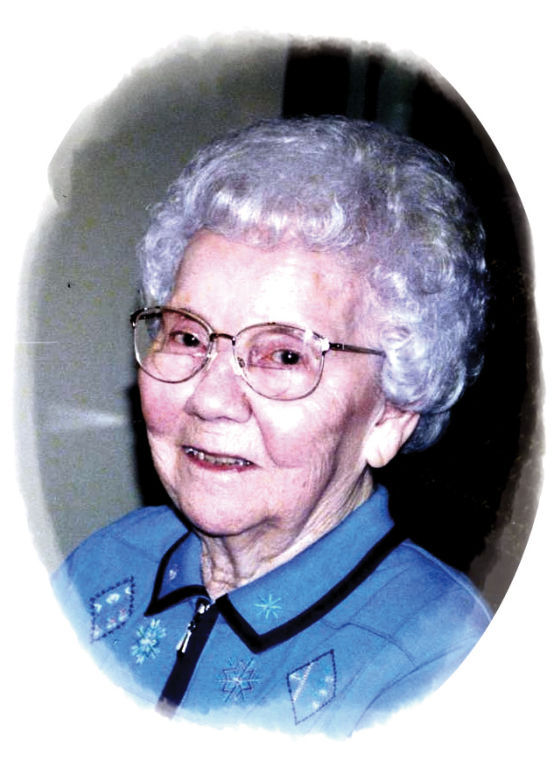 To say that Mrs. Gallaspy experienced and observed many changes during her life would indeed be an understatement. She was born on Feb. 23, 1913, in a log house on Allendale Plantation near Stonewall, when oil lamps, horse-drawn wagons and wood stoves were a part of the daily routine. At the end of her life she enjoyed satellite television, central heating, microwave ovens and digital photos. In the years between, she witnessed the installation of electricity, indoor plumbing, gas cook stoves, telephones and television.

Her life began before WW I, and three of her brothers served in the armed forces during WW II. Her son fought in the Korean War, and a grandson served in Iraq and Afghanistan. She endured the years of the Great Depression in the 1930s. William Taft was president when she was born, and she lived during the administrations of 16 other presidents of the United States.

Mrs. Gallaspy’s family has deep roots in the history of DeSoto Parish. Her great-grandfather, John James Marshall, came to the Stonewall area in 1854 and established Allendale Plantation near the property of his brother, Henry Marshall (Land’s End Plantation). Her grandfather, John Julian Marshall, and his wife, Mattie Nicholson established the first commercial dairy in DeSoto Parish, and they were pioneers in soil conservation practices. They donated land for schools and churches in the Stonewall area. John Julian designed All Saints Episcopal Chapel, which was consecrated in 1887. It is one of two surviving plantation chapels in the state of Louisiana and stands near the Marshall family cemetery.

Mary Leigh graduated from Stonewall High School in 1928, and was the youngest graduate ever from that school. In the fall of 1928, she arrived at The Normal in Natchitoches in a Model T Ford driven by her father. She graduated four years later with a degree in home economics. Miss Marshall was offered a scholarship for graduate study at LSU, but she declined after receiving a job offer to teach home economics at Pelican High School. She arrived in Pelican by train from Stonewall to begin teaching in the fall of 1932, and boarded at the Martin Hotel where many of the other teachers also stayed.

One of her fondest memories involved a summer bus tour in 1937, motoring along the southern and eastern coasts of the United States. A group of teachers traveled from Louisiana, around Florida to southeastern Canada visiting sites along the way. They camped in tents and ate meals prepared by the tour company. She often shared stories of this trip.

Mary Leigh was married at All Saints Chapel in Stonewall on Aug. 10, 1938, to Francis Norman Gallaspy, a widower, and she became mother to his young son, John Norman. She moved to the Gallaspy home, where Norman’s father, J. R. Gallaspy, also lived, and that became her home for the next 75 years. Mary Leigh joined the Episcopal Church as a child, and remained a life-long Episcopalian. However, she attended church with her husband at the Pelican Methodist Church, and was always considered an honorary member of that congregation. Mrs. Gallaspy ended her teaching career in 1939 to become a full time homemaker.

Visitation for Mrs. Gallaspy was held Tuesday, July 16 at Roseneath’s Funeral Home in Mansfield from 5-8 p.m.

Graveside services will be held on Wednesday at 10 a.m. at the Pelican Cemetery. Mrs. Gallaspy’s grandchildren will serve as pallbearers.

We also extend thanks to the DeSoto EMTs and to the physicians and staff of DeSoto Regional Medical Center.

The family requests that any memorial donations be given to the Pelican Cemetery Association (P.O. Box 130, Pelican, LA) or to the All Saints Episcopal Chapel Fund (c/o Episcopal Diocese of Western Louisiana, P.O. Box 2031, Alexandria, LA 71309).