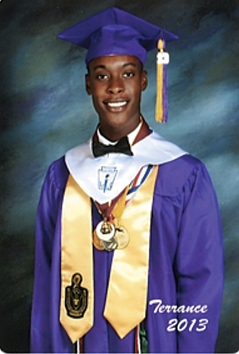 Emma Ross, president of the credit union said, “Terrance is an exceptionally talented young man that is academically strong, dependable, and extremely focused.”

During his four years at Franklinton High, Harvey maintained a 4.0 GPA. He was enrolled in honors courses and also earned 12 hours of college credits to Southeastern Louisiana University through the dual enrollment program. He has had an excellent academic track record throughout high school.

Harvey was included on the banner roll for his four years at FHS, and received honors in world geography, geometry, algebra II, English I, II and III, chemistry, Spanish and many other subjects.

He displayed outstanding leadership as president of the National Honor Society, Spanish Club, National Beta Club for two consecutive terms, a Student Council representative, Fellowship of Christian Athletes (FCA) group leader, Interact Club member, and tennis team captain. He represented FHS at the annual Trailblazer Camp after having been nominated by the administration. The camp allowed him to learn and share scholarship information with the seniors at his school.

Harvey is also very active in Hayes United Methodist Church, where he is president of the choir, participates with the Hayes U.M.C. Drill Team, is part of the Buddy Tutoring Program in math and reading, and also a volunteer in the church’s vacation Bible school. His community service includes tutoring math and reading at Franklinton Primary School, Head Start helper, where he annually conducts an Easter egg hunt, and as a dedicated and willing volunteer at Good Samaritan Nursing Home in Franklinton.

Because of his outstanding academic record, positive attitude, pleasing personality and his ability to lead, he was chosen FHS Student of the Month in November and the overall High School Student of the Year for 2012-13 for the Washington Parish School System.

Harvey will be attending the University of Southern Mississippi in Hattiesburg, Miss., on an academic scholarship. His ultimate goal is to major in biological sciences and later attend medical school to pursue a career as a dermatologist.