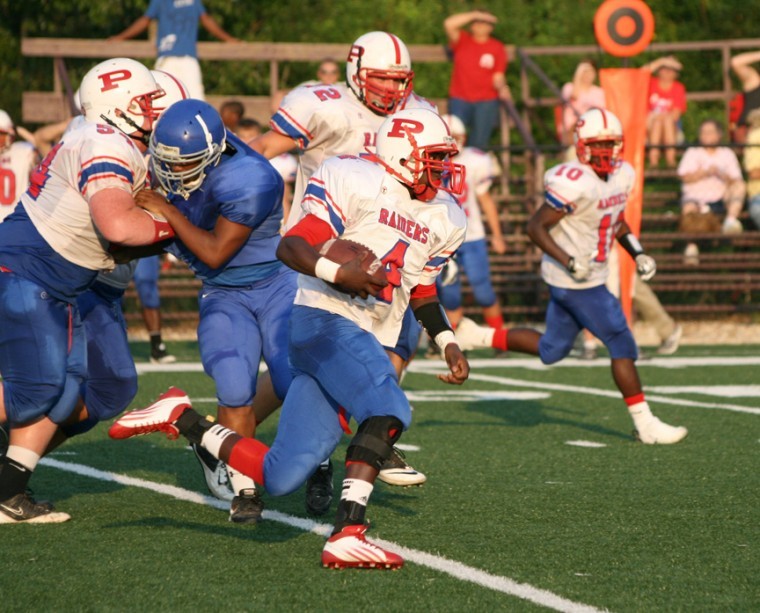 Pine scored two quick touchdowns and held off L.B. Landry for a 14-12 victory in the Northlake Christian Jamboree at Wolverine Stadium on Thursday evening.

“We thought it was important for us to come out and get a good drive going,” Pine coach Bradley Seal said. “Most of the first half, our offense looked fine and then they started blitzing a lot and we had some protection problems that are correctable. In the second half, I was real pleased with the defense. They never gave up the big play. We fought hard and wanted to get the win.”

Derrick Dillon completed 5-of-10 passes for 84 yards and one touchdown for Pine. Curtis Hart had two receptions for 49 yards and one score and Demoreo Carter had two interceptions. Tyran Holmes returned a fumble for a touchdown.

Don Scrivens rushed for 86 yards and one touchdown on 20 attempts and returned a kickoff for another score.

Hart dived to the left pylon on a 33-yard catch and run from Dillon to cap the Raiders’ opening drive after Carter’s 20-yard run and Brad Ladner’s 16-yard reception. Dillon hit the right pylon on the conversion to make it 8-0 with 11:59 left in the first half.

Landry drove to the Raider 2 on the ensuing possession before Holmes’ 95-yard fumble return to give Pine a 14-0 lead with 5:27 left in the half.

Carter intercepted Joe Hoye on the next series but Pine couldn’t capitalize. Scrivens’ 2-yard run cut it to 14-6 with 1:14 left in the half.

Scrivens returned the second half kickoff 86 yards to reflect the final tally. Devonta Pigott strip sacked Kevin Rapp on Landry’s first series of the second half and recovered the fumble. Pigott deflected a fourth down pass on the Bucs’ next possession before Carter’s second interception on the final.